As directed by the government, BGWLC will be closed until further notice. Gym membership payments will be paused for the time being.

From: The trustees of Bethnal Green Weightlifting Club

Here are the links to the protocol and programme for the 16th and 17th November:

Shared from Word for Android
https://office.com/getword

The 2019 Southern Masters Weightlifting Championships will be held at BGWLC on Sat 16th & Sun 17th November.

Entries will be kept open until there are 100 competitors, 50 male and 50 female. This can be followed on a separate post.

(1) There will be a 10 minute break between each group.
(2) There will only be a break between the snatch and clean and jerk, if the group has six or less lifters.
(3) Lot numbers have been allocated and will be retained with the lifter throughout the competition even if they move categories and / or groups. Once the groups have been confirmed on completion of weigh in, then the lot number will be changed to the start number.
(4) The timetable is a guide only. If the number of lifters in Group 1 are absent, then we shall start all other groups earlier. If one lifter is missing then we will start 9 minutes earlier. Of course all my timing are theoretical and it is subjected to how fast or slow a group may run. We will not wait, but carry straight on. Therefore you should follow the course of competition very carefully.
(5) All competitors should remain in the venue during the competition – that is from weigh in – until completion of group. If you wish to leave then you must inform the Technical Controller – who shall be appointed on the day.

From 11th July 2015 we have a new Olympic weightlifting coach at BGWLC! Sauro Gardenal is a former British Masters Champion in the 85kg class (2011 & 2012) with many years of coaching expertise.

Sauro will be coaching sessions at the gym on Monday, Wednesday & Friday evenings (see our Opening Times page). Olympic weightlifters are, as always, also welcome to train at the gym any time Sauro is not there.

Please join us in welcoming Sauro & wishing him the best of luck at BGWLC!

On 14 & 15 March BGWLC took a team of weightlifters to the BWL Masters championships, held at Lillieshall. 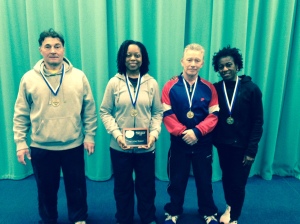 Mark B and Micky

A big thanks to Martin Bass who accompanied the lifters.

Bob Crisp sadly passed away on Christmas Day 2014, and laid to rest on Friday 16th January by his loving family and wife Sheila.

Always a mind of wisdom, on one occasion while coaching a lifter at an international he convinced the lifter to drop his opening jerk by saying in the manner of someone very wise: “That’s rather a very heavy weight to start with, I suggest dropping 10 kilos” which the lifter did, and went on to do a very good total.

Competing in his last World Masters in 2012, and winning the bronze medal, travelling all over the world with his good wife Sheila, he will be missed by many on both the national and international scene.

Always a fighter, overcoming many illnesses, Bob was an inspiration to all who had the pleasure to meet him. And so our sympathy goes out to all his family at this very sad time.

RIP Bob, from the Masters both north & south of the border, you will be missed.

The Bob Crisp Memorial Shield will be presented to the Best Female Lifter at the Southern Masters, in Bob’s honour.