We had 8 of our lifters competing at this year’s World’s – AMAZING!!!

For your information, this year’s championship’s weigh-in time was at 6am – 7.30am for an 8am lift-off. Try it!

June and Ernie were up first on Day 1.

Ernie (bottom middle) & June (bottom right) with Martin, Alan and some of the Masters team

Ernie did what Ernie does, went 7/9 and finished with a 220kg deadlift to come 1st. This was Ernie’s 5th World Championships victory – 5 TIMES WORLD CHAMPION.

June had some stiff competition, after all this is the World’s!

Missing her first 2 squats didn’t help the nerves but she got her 3rd attempt which also gained her a silver medal. A PB bench press and PB deadlift contributed to an equal PB total which placed her 4th overall. It’s not easy! 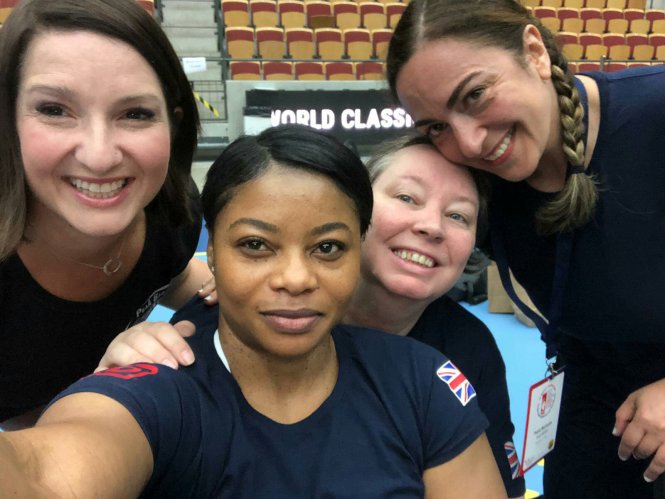 Paola (right) with other M1 ladies

Paola went 7/9 with a big 172.5kg deadlift to finish and a 5th overall place in her first international. A very good performance, Paola shows very little nerves and enjoyed herself throughout.

Thomas (2nd from the right)

This was Tom’s 2nd International and his training had been good. 2/3 squats with a PB 257.5kg was a good start. Tom’s bench is not the best due to an old injury so 3 easy benches and then it was deadlift time.

An easy opener of 287.5kg was followed by a 305kg second. 310kg on the bar for his 3rd and a probable medal. Tom pulled it – completed the lift but unfortunately had soft knees and received 3 reds from the refs. The one that got away! Anyway a good day for Tom, a PB squat, a PB total and a top 10 finish!

Young Nathan ia a real talent. A huge PB squat of 257.5kg was followed by a PB bench of 137.5kg. 2 deadlifts finishing on 275kg but missing 285kg gave him a massive 670kg PB total, 4th place finish and a bronze medal for his squat.

Dapo was looking for something big in his deadlift and his training had been going well. 3 squats 240/250/255 was a good start. He missed his opener on the bench, got it on his second then finished on 160kg. Deadlift time! 305kg for an easy opener – except he rushed it and missed the lift. He took it again for his second attempt, a good lift so let’s move on. Missing his opener changed things as he only had one more attempt left. Anyway, we put in 330kg and waited for all the other lifters to finish. 330kg stayed on the bar to give Dapo the opportunity to pull for 2nd place overall. A good effort but just too much on the day. (Lessons learnt!) A silver medal in the deadlift was Dapo’s reward but he was very disappointed with himself for a while. The big total is in there and COMING SOOOON!

This was Temi’s first international after her win at this year’s British. Her bodyweight was down from 85kg to just 80kg so we would see how she looked. 2/3 squats, 172.5/177.5kg missing 182.5kg was a good start. 3 comfortable benches 90/92.5/95kg adding to her Total. Temi is a good deadlifter so we would have to see what she might need to pull to, maybe, get a medal. A comfortable 205kg opener was followed by 217.5kg. 227.5kg was needed for a medal. 227.5kg was pulled for a bronze medal, British and European Records. A PB total, PB deadlift and a medal at Temi’s first international – FANTASTIC!

2019 Women’s All England Powerlifting Championships held at Moulton College on 25/26 May, by Martin Bass

We had 5 ladies representing BGWLC at this year’s championships:

This was Ruth’s first national competition and she did very well. Going 8/9 and getting PBs in squat, bench press, deadlift and total. 4th overall and a good performance.

Alison didn’t get of to the best of starts only getting one squat. The bench was the same, only getting her opener, missing her 2nd (no energy) so we left the 3rd attempt.

We dropped her opening deadlift as she was obviously struggling. 120kg to open followed by a very good 130kg. Then 137.5kg for an all time PB. All credit to Alison for staying in the competition and ending up with a BIG DEADLIFT and 1ST place (you never know)!

Karen was looking to put a good total together as her training had been going well. 2/3 squats was a good start. The bench finished on 90kg for an all time PB. 2/3 in the deadlifts gave Karen a PB total coming 4th overall on bodyweight. A good day.

Not the best of starts for Moa, only getting her opening squat! (This is where I DON’T criticise the refs but I want to). 2 benches 87.5kg and 90kg, missed 92.5kg set her up for a good total. 2/3 on the deadlift had Moa finishing with 417.5kg for 1st place. Time for Moa to rest now as she has had some very hard competitions recently.

Congratulations to our lifters who took part in the competition.

Look out for the Bethnal Green lifters featured in this article.

Congratulations to all our lifters who competed in the above championships, there were plenty of PBs for everyone!

Just a few words regarding the performance of two of our juniors, Moa and Dapo, at this year’s European Classic Powerlifting Championship held in Kaunas. They were magnificent.

It was the end of a long year competing for both of them; the Worlds in Calgary in June, their respective British Championships in September and October, culminating with the European Juniors in the last week of November.

This is Moa’s last year as a junior and she finished it very well, 3rd overall and a Gold medal in deadlift. Throughout the year she strives to get better and is a determined trainer in the gym. On the platform she got her rewards.

I must mention her last deadlift, she needed to pull 180kg (a big deadlift for a 63kg class lady) to place 3rd overall and secure deadlift gold. One lift for all the money. Her second attempt had been 177.5kg (PB) and that was hard enough. She pulls 180kg (PB)! It wasn’t pretty, it was as hard as it could be but she did it! On coming off the platform she was totally spent and empty.

For me she will pull a bigger deadlift but not a better one!

Dapo is a young man with tremendous potential. This year unfortunately he has been managing an injury which as yet has not been sorted out. This has meant that on the squat and to a lesser degree the deadlift, loading him up prior to a competition has not been possible. At the European’s his preparation was very hit and miss but as he always does, he came good on the platform. Like all good lifters the platform is where they make a statement.

He achieved 5th overall and silver in the deadlift. A PB Total and deadlift was his reward for persevering throughout a less than perfect training cycle.

Both Moa and Dapo deserve the utmost credit for the way they both lift and represent BGWLC and Great Britain.

Abbie Kasparis has won the Bronze Medal in the Invictus Games Ladies Lightweight Class Benchpress with lifts of 35kg✔39kg✔41kg❌.